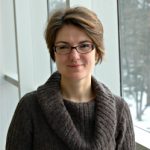 Valentina is an Assistant Professor of French Literature (17th and 18th century) at the Department of Romance and Classical Studies at Michigan State University. Her fields of interest are: Italian and French Literature (15th – 18th century), Queer and Gender Studies, Narratology, Relation between fiction and reality, Querelle des femmes. Her first book Les mille et un visages de la virago. Marfisa et Bradamante entre continuation et variation (Garnier Classique, 2016) analyzes the evolution of the representation of the woman warrior in French and Italian literatures from the Middle Ages to the Enlightenment by taking into consideration the political and historical context of this evolution and the symbolic value of the woman warrior in each specific time period. She is currently working on the Marquis de Sade and his influence on popular culture. She is also the recipient of the Humanities Without Walls grant for her project “Legacies of the Enlightenment” http://enlightenmentlegacies.org/ that she is co-directing with Tracy Rutler (Pennsylvania State University)

The Graphic Narratives Network (GNN) is a collaborative research initiative at Michigan State University. It enables an interdisciplinary group of scholars—both faculty and students—to work collaboratively on topics related to graphic narration in its various forms: comics, graphic novels, photo-essays, animation, and film. Working across languages and cultures, we seek to advance scholarship on verbal-visual texts. Our major activities include internal working sessions and public-facing symposia, as well as the digitization of source materials from MSU’s unique International Comic Art Collection. One targeted outcome of the project is this rich website that will be an interactive scholarly forum, showcasing research and pedagogy concerned with the hybrid form of graphic narratives.

More about the GNN

This interdisciplinary network was founded in 2017 by faculty members with a shared interest in text-image studies and who are working in German, French and Francophone, and Japanese Studies and in Art, Art History, and Design. We are in the process of expanding to include faculty in English, History, and Journalism, and we are interested in international partnerships.